Elevator and the Romanian Season

Two teenagers. A jammed lift. No mobile signal.  ‘Listen. Listen…days ago, I had this idea. I just couldn’t make it clear in my mind. But now I can.’

Inspired by a true story, Gabriel Pintilei’s moving two-hander explores human dynamics in an extreme environment as it follows two youngsters journey through one of life’s worst nightmares. Spurred on by a sense of romantic adventure, they find themselves trapped inside the lift of an abandoned building. As one failed escape attempt follows another, and jokes are wearing thin, how long before innocence, friendship and stamina collapse under the weight of their confined existence? 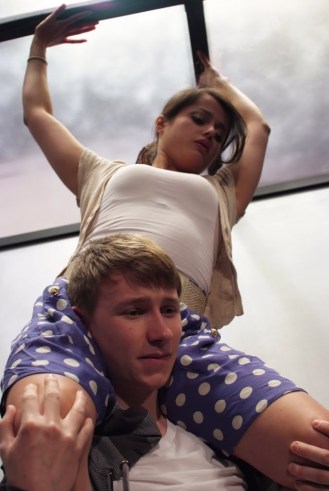 While collaborating with a translator from the Romanian Cultural Institute in London, we realized that there was a lack of exposure in London audiences to new trends in performance and cultural discourse from Romania.  We then co-curate the first festival of Romanian new writing in London. The festival featured two theatre productions, book and play readings, post show talks, an ongoing art installation, puppetry workshops and music, the season showcased the best of emerging Romanian talent.

As a part of this festival, I directed the lynchpin production, Elevator.  While in many ways a traditional staging of a new play, the process involved a muscular re-translation, not just from language to language, but also from film to live performance, and from culture to culture.   In order to do this, I departed entirely from the script, devised the show anew, and then brought it back step by step towards a new version and new translation that the original author thought exceeded his hopes for quality of production and faithfulness to his intention for the play itself.